Paul Philippon was happily pursuing a career teaching philosophy when the siren song of brewing beer, his hobby since 1987, could no longer be ignored.  He went to work for a succession of three breweries until he felt his experience was sufficient to try to open a brewery himself.  The Duck-Rabbit Craft Brewery was born!  Duck-Rabbit sold its first beer in August of 2004 and has been growing steadily ever since. 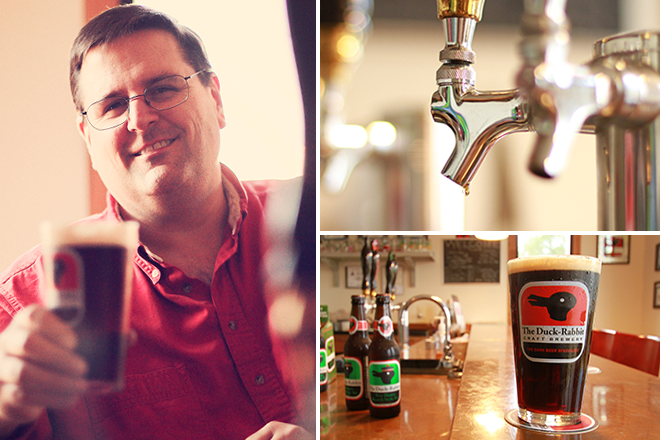 What’s Up With That Logo?

Years ago, before he became a professional brewer, Paul made his living teaching university philosophy. A version of the duck-rabbit diagram, which looks like a duck or a rabbit, depending on the viewer’s perspective, appeared in a philosophy book Paul admires (Philosophical Investigations by Ludwig Wittgenstein). He liked the idea of using a logo with ties to his former life.

There are lots of great beer styles Duck-Rabbit doesn’t brew.  Instead, it focuses on dark beers: a set of styles that had been under-represented in the beer market.  There is an enormous range of flavor possibilities in dark beers – something for every beer fan!  The hope is that this specialization can help to set The Duck-Rabbit apart from other breweries.

The Duck-Rabbit brewery is located in the small rural eastern North Carolina town of Farmville.  It was important to Paul’s plan to own, rather than to rent, the real estate for the brewery.  Further, he wanted to be able to expand without uprooting.  In Farmville, the brewery was able to purchase a very affordable 4.5 acres of land with excellent access to shipping lanes.  As a fantastic bonus, the Farmville community has been extremely welcoming!